The Byzantine Generals’ Problem is another paper by Leslie Lamport, the author of the paper we looked at in my first post “Time, clocks, and order”. The paper was co-authored by Marshall Pease and Robert Shosta and published in 1982. It can be considered a follow-up of the original “Reaching Agreement in the Presence of Faults” paper.

First there were two

Let’s first look at the two generals’ problem: it’s one of the first widely known distributed consensus problems and concerns itself with reaching consensus on an unreliable link. We’re gonna look at the problem first and show that it’s impossible to truly reach consensus when the link is unreliable.

The setup of the problem is very simple and was first described by Jim Gray in “Operating Systems: An Advanced Guide”. There are two armies on opposite sides of an enemy. They must decide on whether to attack or retreat. If only one of them attacks, they will be slaughtered, meaning they must be in agreement on what to do. In order to coordinate on a strategy, the two generals can only communicate using a carrier pigeon which can get lost.

It is impossible to achieve consensus in the above scenario. Let’s say one of the generals wants to attack, so they send a message to the other general. That message can either be delivered by the pigeon or the pigeon gets lost, meaning the message never gets delivered. The sender has no idea which happened, therefore cannot attack with the certainty that the other will also attack.

And then the rest arrived 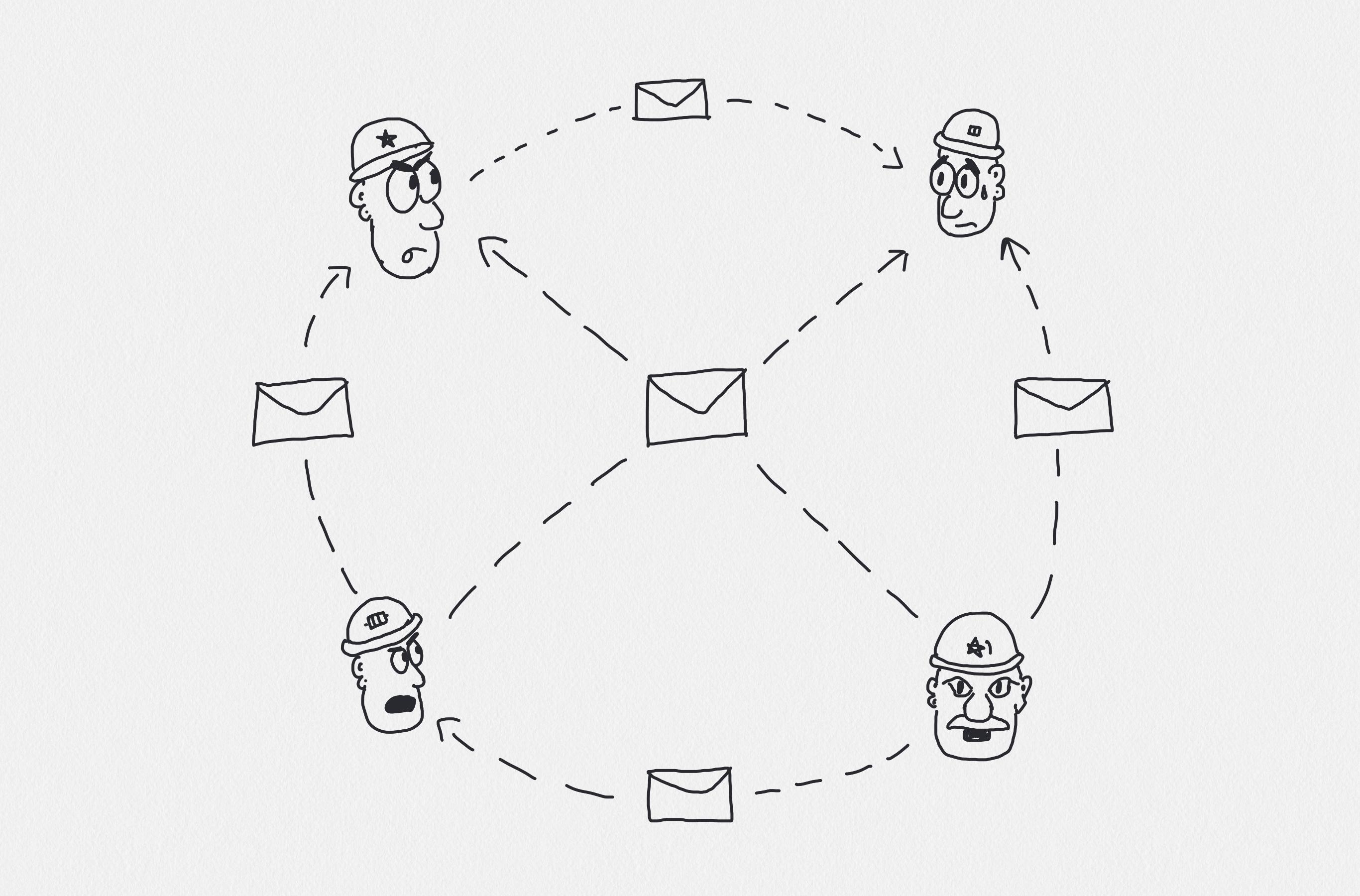 Now with the Byzantine Generals’ Problem, let’s add add more generals, some of whom may be traitors and will attempt to deceive other generals, preventing them from achieving consensus. This problem will show us how we can implement a reliable computer system.

To be able to achieve consensus while these traitors are present, the other generals must have an algorithm that satisfies the following conditions:

It’s almost impossible for us to be able to objectively say, or formally prove what a bad plan is. Therefore, we simply say a bad plan is one which the majority did not agree to. In a majority vote, the traitors could only affect the vote if the loyal generals were almost equally divided, this means that we couldn’t really call either decision in this scenario a bad plan.

We can satisfy our first condition by ensuring that all generals use the same method for combining all received messages.

You may be thinking that the easiest way to solve this would be for every general to send their opinion by a messenger to every other general. This however does not work, because our first condition would require all generals receive the same messages, but a traitor could send different messages to each of the generals.

So to be able to satisfy our first condition, every general must obtain the same information. This means that we cannot use the message the general sent us directly, since a traitor may send different values to different generals. Additionally, we can say that if a general is loyal, then the message they send must be used by all other loyal generals.

That’s a lot to think about, but we can reduce it down to this:

Knowing this, we can restrict our consideration to the problem of how a single general sends his message to other generals. Therefore, we can simplify the problem even further.

We say that all generals must send their order to all other generals such that:

IC1 follows from IC2 if the general is loyal. We call these conditions interactive consistency conditions.

So now let’s look at the Byzantine Generals’ Problem when generals can only send oral messages. An oral message is one whose contents are completely under the control of the sender, meaning a traitor can send any possible message.

The Byzantine Generals’ Problem may seem simple, however if we can only send these oral messages, then no solution will work unless more than two-thirds of the generals are loyal. This means that with 3 generals, there is no solution that can work with even a single traitor.

Now it’s time to prove that no solution can work as stated above. Firstly, we allow for two possible decision, either attack or retreat. 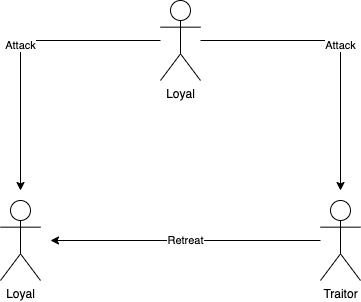 Let’s assume we have 3 generals, one general sends an attack order to both of the others. One of those generals however is a traitor and reports to the other that he received a message saying he should retreat rather than attack. If we were to satisfy IC2, the loyal general should obey the attack order. 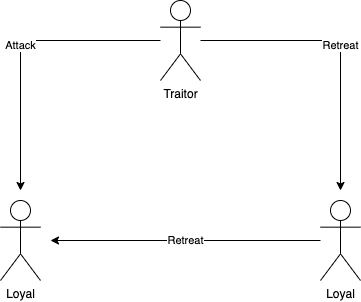 Now let’s consider a second scenario, our general sending messages to the other is now a traitor and sends an attack message to one of the other generals and a retreat message to the other. In both scenarios, our loyal general does not know who the traitor really is and hence to that general both of the scenarios are completely identical.

If our traitor continues to lie, then the loyal general has no way to distinguish the situation and must honour the attack message. Meaning, whenever a general receives an attack from the commander he must obey it. The same thing can be said in the other direction, if a general receives a retreat from a commander he must obey it even if the other general states he received an attack message.

Therefore, in our above scenario one general obeys the attack, while the other obeys the retreat. This violates our condition IC1, which states that all generals must obey the same order, concluding that no solution can work for 3 generals with a single traitor.

You may think this problem is hard due to the requirement to reach exact agreement. However, reaching approximate agreement is just as hard.

Let’s assume this, the generals need to agree on an approximate time of when to attack. To do this, we require the following conditions:

We assume that the messages are sent and processed far in advance, meaning that agreement could be reached in time.

This problem is unsolvable just as the above, unless more than two-thirds of the generals are loyal. We can state this, because if we could solve this problem for a solution with three generals that was able to cope with one traitor then we could construct a three general solution to the Byzantine Generals’ Problem that also worked in the presence of one traitor.

A solution with oral messages

Firstly, we make the following assumptions for oral messages:

The first two assumptions means that a traitor cannot interfere with the communication between two generals. Whereas the third stops a traitor from preventing a decision being made by not sending any messages.

Additionally, we make the assumption that all generals can send messages directly to every other general.

Finally, we need some kind of default. Because traitors may decide not to send a message, in our case we will use retreat as our default.

So let’s define our algorithm $OM(m)$, where a general sends an attack or retreat message to $n - 1$ generals ($n$ being the total number of generals). This will solve Byzantine Generals Problem for $3m + 1$ generals with $m$ traitors.

Firstly, our algorithm defines a function called $majority$, this function either returns the majority of the received orders, or the default value, in our case retreat.

For $OM(0)$ or when we have no traitors, the algorithm works as follows:

So now that we see how the algorithm works, let’s look at how it would work for 4 generals with a single traitor.

Let’s assume however our first general is malicious. If he sends 3 random values to all the generals, after running the algorithm recursively, every general has 3 random values. This would mean that the majority of those random values is used.

A solution with signed messages

The Byzantine Generals’ Problem is hard to solve because our traitors can lie, however we can remove this ability. One way to do this is by ensuring that the generals send unforgeable signed messages. This means that we add the following assumptions to our previously made assumptions on what an oral message embodies:

We make no assumptions on a traitor general’s signatures, this means that traitors could collude with each other. However, for this solution to hold, we still assume that all generals can talk to one another. With our signature introduced, our previous argument saying we need $3m + 1$ generals to cope no longer holds. We can now construct an algorithm that copes with $m$ traitors for any given number of generals.

In conclusion, the Byzantine Generals’ Problem highlights the difficulty of reaching consensus when nodes can fail in arbitrary ways. The paper goes into further details of how to solve the problem when the generals cannot communicate with all generals, however we’ve omitted that as it would just become too long of a post. I recommend you check out the paper however!

Shoutout to @ricburton for the drawings